By Garry South, Special to The Bee 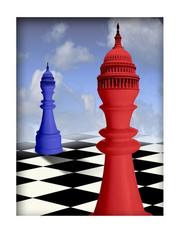 With no presidential race or U.S. Senate contest on California’s ballot next year, the 2014 elections mostly will be a moment of truth for downtrodden California Republicans.

The state GOP and its new chairman, well-regarded former state Sen. Jim Brulte (also a personal friend, in the interests of full disclosure, and one of the smartest political operatives I have ever known in either party), will answer three critical questions about themselves:

Can Republicans actually put up candidates for all eight statewide offices who will end up on the November ballot under the state’s new top-two primary scheme? Can they deny Democrats their newfound two-thirds majorities in both houses of the Legislature? And can they win back one or more of the nine congressional seats they’ve lost since 2000, dropping them to only 15 of the state’s 53 members of Congress?

Let’s start with the eight races for statewide constitutional offices. The new nonpartisan primary system adopted by voters in 2010 and used in legislative and congressional races in 2012, will be in play for the first time ever in statewide races in 2014. This top-two method eliminates party nominations entirely and advances the two top vote-getters in the primary, regardless of party, to a two-way runoff in November.

We are now only about five months from the June 2014 primary. Although there is a smattering of potential GOP candidates for governor and secretary of state, there is no evidence whatsoever that Republicans can field candidates across the eight statewide races who can finish first or second in the primary, hence moving to a fall runoff. My prediction is that for the first time in California history, two Democrats will vie against each other in the fall for one or more statewide offices. This itself will further suppress the viability of the GOP.

In the governor’s race, with the absence of any meaningful Democratic challenger to Gov. Jerry Brown, Brulte’s worst nightmare would be if tea party darling state Assemblyman Tim Donnelly, an anti-immigrant former Minuteman vigilante who was arrested for trying to carry a loaded pistol onto a Southwest flight, ends up being the Republican to face Brown. If so, there goes GOP rebranding.

On the legislative front, Democrats in 2012 won two-thirds control of both chambers for the first time since 1882. Especially in the Assembly, a couple of the Democratic successes were unexpected, in seats the GOP should have won. The GOP may score a success here or there, but the majority Democrats will have vastly more resources to protect their majorities and will no doubt target a few well-picked Republican incumbents just to make sure the GOP has to play defense, too.

On the congressional front, the Republicans may have their best chance to make a small comeback, but they also hold at least three potentially vulnerable seats of their own that will be the top targets of Democrats nationwide. More GOP resources will be in play in the congressional seats than in legislative races, since Republicans control the U.S. House, and their big corporate and ideological donors will supply all the cash necessary to ensure they can protect seats and make runs at Democratic targets.

Ultimately, though, whether the GOP can survive as a viable party – it’s now down to only 29 percent of the electorate – in the Golden State will not really depend on the answers to these three questions alone. Rather, is the party willing to radically alter its right-wing social stands that are not only unacceptable, but unfathomable, to a majority of Californians – on immigration, on same-sex marriage, on a woman’s right to choose, on gun control, on the environment? If you want to compete as a party in California, don’t act like you’re in Wyoming, or Oklahoma or Mississippi.

Last March, Brulte asked me to address the California Republican Party board of directors at their retreat in Ontario and tell them what was wrong with the party. I used a corollary from my own political history to make the point that they’ll either adapt to the California political environment and realities, or they will die, just like a retailer who didn’t keep up with the market (Seen any still-open Blockbuster stores recently? How’s your BlackBerry?).

I’m a native of Montana, where I cut my political teeth and my family was involved in elective office. In Big Sky Country, hunting is akin to a secular religion. “If guns are outlawed, only outlaws will have guns” bumper stickers are ubiquitous. In other words, gun rights are a settled issue in that state and its Old West culture. No gun-control advocates need apply.

Democrats know this as well as Republicans, and have had to adapt to that reality. I have had the privilege of knowing personally every Democratic senator from Montana since the 1950s. With a couple of exceptions, I believe that had these Democratic senators been representing New York orNew Jersey, they would have been strong advocates of gun control. But in Montana, they had to let the issue go. That was the price of admission in order to be competitive in the state’s cultural environment.

If California Republicans are not able to make similar significant – and most likely painful – adaptations to the political realities of the state in which it is operating, then no amount of voter-registration drives, candidate-recruitment programs, ethnic outreach, enhanced fundraising capabilities, or even picking off a Democratic seat or two, will save it.

As the old saying goes, you can’t sell cat food if cats don’t like it.

Garry South is a longtime Democratic strategist and commentator who ran Gov. Gray Davis’s campaigns in 1998 and 2002.