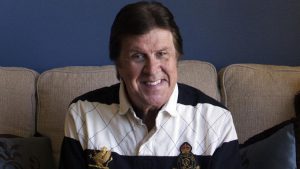 The question was rhetorical.

“Can a boxer be a Christian?” Garry South asked. “Because you know what he does: He pounds the crap out of another human being. He draws blood!”

South, a famously pugilistic political strategist, was neither apologizing nor seeking forgiveness as he answered, very much in the affirmative, his own query.

“If you hold every practitioner of every profession to a very pure standard of doing the Christian thing,” he said, “most people are going to fall outside that orbit.” 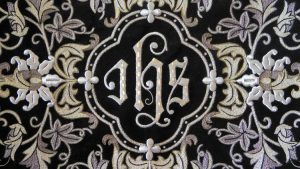 Democratic strategist Garry South has designed religious vestments for more than 30 years. Some have been commissioned by Catholic or Episcopal parishes. (Cheryl A. Guerrero, Los Angeles Times)

South is a person of strong and abiding religious faith, which may surprise those familiar with his pile-driving personality and blast furnace of a mouth, features engaged the past few decades by several California Democrats, including, most notably, former Gov. Gray Davis.

Politics has always been a mix of the high-minded and underhanded, fusing the idealistic and cynical.

Still, the hobby South has pursued for nearly 30 years, a sideline to political warfare, is more than a bit unexpected: It’s designing religious vestments, the elaborate garments used as part of Christian worship. His latest work, an altar frontal featuring tapestry and gold fringe, will be used for the first time at an Easter service in Fullerton.

Talk about the sacred and profane.

South, who has lived in Southern California since the early ’90s, grew up in Montana in a highly religious household. He attended evangelical services at least three and sometimes seven times a week. Eventually, he came to question what he considered the anti-intellectual grounding of fundamentalism, though South says, “I never stopped going to church, or believed it was all hooey. The basic core of Christian faith stuck with me very deeply.”

In college, where he began his career in Democratic politics, South also began exploring different faiths and studying religious history. Attending an Episcopal service, he was struck by the robes worn during the liturgy and the symbolism each possessed.

After graduating, he moved to Washington to work for the Democratic National Committee and later serve in Jimmy Carter’s Agriculture department. He lived just two blocks from Georgetown University and took advantage of the Catholic school’s vast library to deepen his research, seeking to better understand the meaning of individual vestments and the traditions attached to different faiths.

South showed an early aptitude for artistry — a still life he painted in sixth grade hung in his parents’ home until they died at ripe old ages — and after 10 years of study he combined his skill at drawing with his religiosity to design his first vestment. He donated that 1986 Roman-style piece to an Episcopal church in Washington, in memory of his late grandmother.

Since then, South has created more than three dozen pieces — tunics, maniples, stoles and more — taking up to a year and a half on each design and spending many thousands of dollars. Some have been commissioned by Catholic or Episcopal parishes; all were donated or sold at cost.

Over lunch at one of San Francisco’s old-line, white-tablecloth restaurants, South mostly ignored his soup and crab cocktail — and a series of waiters — as he held forth on braids and tassels, embroidery, trim and fabric; he prefers silk, rayon or some combination and never, he said, touches polyester. 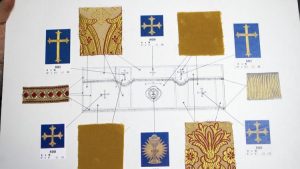 “There’s a certain satisfaction and pride when you go to a religious service where the vestments that you designed out of your own head are a part of that service. It’s a feeling most people will never have,” Garry South says. (Cheryl A. Guerrero, Los Angeles Times)

(South sketches his designs in colored pencil and works with specialized manufacturers in Maine and London, who produce each garment to his specifications. The embroidery is done by experts in Pakistan.)

There is a joy, South said, in doing something so far afield from his usual endeavors, a sensation he likens to a composer hearing his work fill up a symphony hall. It’s a creative outlet, he said, and morally satisfying in a way campaigns are not.

“It’s not just something that hangs on a wall,” he said, forking a mouthful of crab. “There’s a certain satisfaction and pride when you go to a religious service where the vestments that you designed out of your own head are a part of that service. It’s a feeling most people will never have.”

And no, he interjects before the question is even asked, it’s not as though he’s seeking some sort of redemption or leveling of the cosmic scale.

“I’ve done a lot of things in politics … that probably wouldn’t pass muster with the Ten Commandments or the Beatitudes,” said South, an Anglican Use Catholic, but he has never felt compelled to seek priestly forgiveness for any campaign trespass.

“I’m hired to do a job, and that’s what I do,” he says, thumbing through a smartphone gallery of his sacred works before presenting a finely wrought Spanish design. “People get into this field understanding it ain’t patty-cake…. That’s the way democracy works. Democracy is ugly and messy and it’s hardball.”

And God works in mysterious ways.