Featuring new work in the realm of the liturgical arts is one of our stated goals here at LAJ. After all, we are not only interested in the tradition of liturgical art in its historical manifestations but also in its living one’s. Traditional liturgical arts are not, after all, consigned to be mere museum pieces, but rather can and do find a continuing living expression in the here and now.

Recently a reader of LAJ, Garry South — a strategist by day and vestment designer by night — sent in an example of his work; a traditional five piece vestment set (chasuble, stole, maniple, chalice veil and burse) which he designed for one of the priests of the Ordinariate of the Chair of St. Peter in San Diego, California.

Mr. South, a convert, has been at his craft for over thirty years now and has produced dozens of pieces over the years, investing a copious amount of time in the careful design and execution of each of his pieces. He has worked in various styles, from the Roman and Spanish baroque styles, to the gothic revival form that we have the pleasure of showing to readers today.

We will get right to it and show the completed work while actually worn — the ultimate test for any vestment work. I have seen many a vestment which looks fine while laid out, but when worn one might suddenly find that the vestment proportions are off or that it does not wear in manner that is graceful and dignified. Fortunately, that is not the case here. 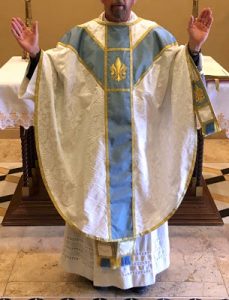 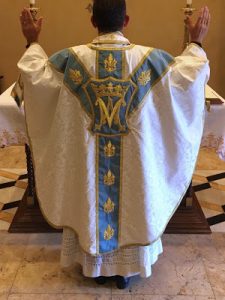 What I particularly like about this chasuble are the textures found on it. There is some depth to it which is accomplished through the combination of elements such as the brocade, the trims and weightier design elements like the fleur-de-lys. (See below)

When you look at the chasuble overall it has a certain weight and substance to it. This lends it a certain stately gravitas in my estimation. This might be better seen below: 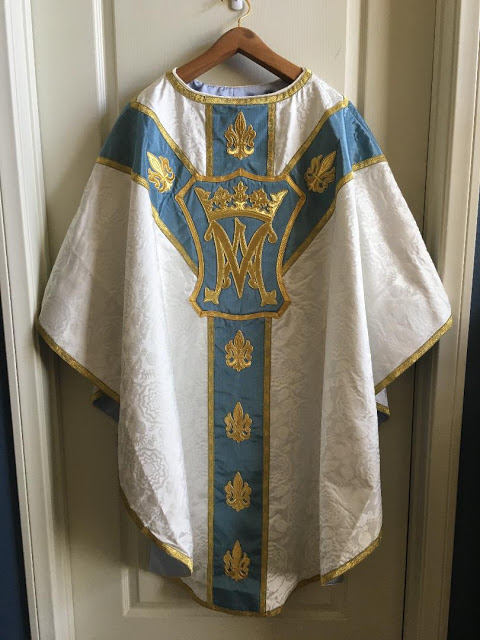 As noted the set is a traditional five piece set, meaning that it can be utilized within both the modern and ancient liturgical uses, as well of course the Anglican use, where it finds its current liturgical home. 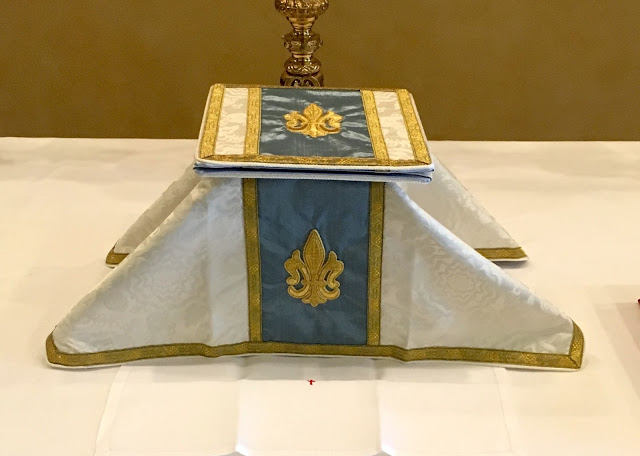 The colours on the set are also quite appealing and I particularly like the parallel colours of the tassels found on the stole and maniplle.

This is a very fine piece of work. All of the aforementioned elements contribute to making it “work” but what I think especially critical are the varying textures and the substance and depth they give to the vestment, adding layers of interest. Whether we are speaking of baroque or gothic styles, it is this sort of aspect that, in my experience, cam mark the difference between a notable vestment and a rather lack-lustre one.

If I were to offer any one suggestion it is one rooted in this same idea. Namely, I do wonder if the front of the chasuble would benefit from more ornamentation — both to add visual interest as well as to balance out the vestment as a whole. This could be accomplished by adding more of the horizontal trim and fleur-de-lys to the front orphreys. To give a sense of what I mean, here are some mock-up’s: 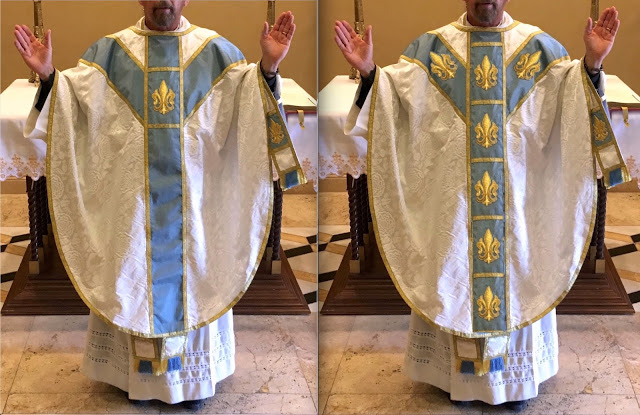 To the left is the design of the back of the chasuble. To the right is the LAJ proposal for the front. This might give a good example of what I mean by balancing out the vestment as a whole by giving a similar amount of ornamentation to the front as on the back. 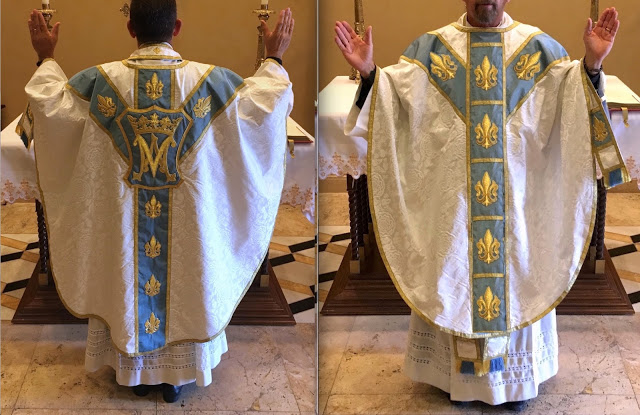 Of course, this is just offered as a suggestion and in a spirit of constructive contribution. Certainly LAJ is overall quite impressed with this particular work by Mr. South and we hope to feature more of his work in the future.