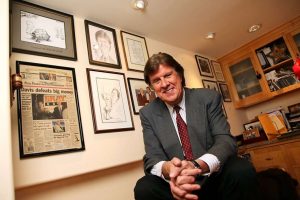 Sharp-tongued Democratic strategist Garry South has long specialized in behind-the-scenes skulduggery that has shaped decades of major political races in California – and the fortunes of many candidates.

Now, like a magician drawing back the curtain shrouding his biggest secrets, South is doing the unthinkable in the political world: He’s making public a room-size treasure trove of private memos, secret campaign strategy plans, never-seen TV spots and correspondence, as well as results of his efforts to dig up dirt on election opponents.

South’s rich archive of materials will soon be known as the UCLA Library’s Garry South Collection of Political Research,university officials said this week.

In the competitive world of political consulting, where trade secrets are guarded like family recipes, the new political collection may represent one of the most complete collections illustrating how the sausage of political campaigns is made in California.

“I think it gives tremendous insight into what goes on behind the scenes,” said Gary Strong, the former California state librarian who now heads the UCLA library. “The more we can demystify it, the more enlightening it will be for all of us.”

The South archives, to be formally inaugurated this month, present a complete portrait of insider dealings and strategies behind the campaigns of Gray Davis, the Democrat who was twice elected governor after serving as lieutenant governor and controller.

South has advised campaigns, including Gavin Newsom‘s 2010 run for governor and Joe Lieberman‘s thwarted presidential bid in 2004. But the strategist, whom Newsweek once called “a one-man brain trust of the battlements of Fort California,” has been most closely linked with Davis, whom he served as chief of staff and senior adviser for years.

Davis, reached this week in Los Angeles, called the cache of campaign materials for UCLA “terrific. It’s great for the university, and it’s a wonderful tribute to Garry.”

The former governor, an attorney for the Los Angeles firm Loeb & Loeb, said the release of materials detailing his campaigns are “going to be very instructive to the public. They’ll see that campaigns are part planning, part preparation – and a lot of luck.”

South said the record of his political dealings includes “everything from focus group tapes, all the TV spots that were done, all the internal strategy memos,” polls and private correspondence.

“I wanted to give them the fullest record I could possibly give them on how these campaigns are really run,” he said.

The unusually complete documentation of a slice of California political history was preserved because the self-described “anal-retentive” strategist meticulously catalogued the strategy and materials related to Davis’ campaigns and guarded them in a “climate-controlled” storage room.

Perhaps the most interesting part of that mix may be what’s known in the campaign business as “opposition research.” The collection contains everything South researched on major public figures and business leaders who ran against Davis – or who posed a political threat to him.

Riordan was expected to present a serious challenge to Davis in the 2002 governor’s race until the GOP candidate felt the sting of research culled from South’s library. The moderate Republican’s poll numbers plummeted 60 points in three weeks after South found a long-forgotten videotape of Riordan calling abortion “murder,” a charge that served as a coup de grace to his campaign in pro-choice California.

South’s material is being prepared and digitized for public viewing, and it will lend even more heft to a growing collection of political memorabilia and material at UCLA. The university library has increasingly dedicated its efforts to “harvesting” political and campaign websites, stuff that “lives and dies quickly” on the Web, librarian Strong said.

UCLA’s library, he added, has captured websites of the 300-plus candidates who ran in the 2003 recall election that targeted Davis, allowing them to be available for study long after they disappeared from the Internet.

The gift of such an archive of political materials is a first for Strong’s institution – and a remarkable donation from a political strategist, he said, because South was willing to make his trade secrets public.

In political campaigns, “original source material is extremely hard to get access to and actually get your hands on,” the librarian added.

South said he waited a full decade after his last campaign with Davis before opening his trove to public scrutiny – timing that’s no accident.

It means, he said jokingly, that the “statutes of limitations have expired.”