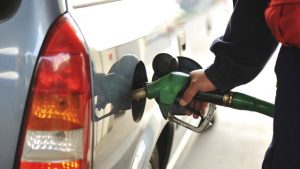 Prices at the pump are widely expected to go up early next year.

California’s cap-and-trade system expands next year. And while the program has already discreetly impacted energy prices, consumers will likely get their first direct glimpse at cap and trade’s effect on markets when it’s applied to transportation fuels.

That fact has many politicians nervous, including a group of Democrats who are urging Governor Jerry Brown to hit the breaks on cap and trade.

‘What The Hell Is Going On?’

There’s no day-to-day cost that smacks you right in the face quite like gasoline. You fill your car up, and you stare straight at the price as it climbs higher and higher. So it’s no surprise that when a recent poll asked whether Californians would keep supporting the state’s cap-and-trade system, even if its new phase leads to higher gas prices, support suddenly tanked by nearly 40 points.

Democratic political consultant Garry South doubts many people really understand what the program does. “I think it’s just so far out of the typical person’s viewfinder that the impact of this is not going to be known until gasoline prices actually start occurring,” he said, “and people say, ‘Hey what the hell’s going on here?’”

What’s going on is, in fact, a kind of stock market for pollution. Companies buy and sell the right to emit carbon dioxide and other greenhouse gasses. Right now, the system covers industrial sources like power plants. And the direct consumer impact has been blunted a bit by rebates and other breaks for power utilities.

Next year, cap-and-trade expands to cover transportation fuels. Oil companies will be charged that assessment up front, and then pass the cost along to consumers. State officials say that could lead to a price spike of as much as 30 cents a gallon, though most experts think it will actually be around 10 cents. “The actual price increase will depend on a wide variety of economic, technological and regulatory factors that are difficult to predict,” the Legislative Analyst’s Office noted this week.

Either way, Republicans and business groups have latched on to the potential price increase, which they’re calling a “hidden gas tax.”

But even some cap-and-trade supporters are having doubts. “I represent a district in southern Fresno County that is very poor,” explained Assemblyman Henry Perea, a Democrat. “My constituents are going to be hurt a lot more than constituents in other parts of the state where the economy’s stronger, and people are making a lot more money.”

Perea is leading the effort to delay cap-and-trade’s expansion to transportation fuels. Fifteen other Democrats are supporting a slow-down. Perea said the push is about the economy, not the environment. He’s framing the debate as Valley Vs. Coast, Rich Vs. Poor, pointing out the geographic divide between the lawmakers supporting a slowdown, and those pushing to stay the course.

A three-year delay, he said, would allow policymakers to ask some questions. “How do we meet the goals of AB 32, how do we reduce greenhouse gasses and how do we do that in a meaningful way through fuels, and not have a large economic impact on everyday people who are struggling to make ends meet?”

That may be hard to do, though, since the entire point of cap-and-trade is to make carbon emissions more expensive. That’s not the sort of thing politicians say in front of crowds. But Senate President Pro Tem Darrell Steinberg did just that during an unusually blunt speech earlier this year. “It may not be popular to say, but that’s necessary. Higher prices discourage demand,” he told the Sacramento Press Club. “If carbon pricing doesn’t sting, at least a little bit, we won’t change our habits.”

Not exactly a populist argument. But the push to delay the cap-and-trade expansion may still come up short. That’s due mostly to a lack of political muscle.

First, there’s the simple fact that gas prices won’t be affected until January, long after the state’s election.

The second factor is more powerful: cap-and-trade’s biggest cheerleader is the popular, well-funded Governor Jerry Brown. “This is a path that must be pursued today, the next decade, the next hundred years,” Brown said at a climate change conference in May.

Still, political consultant Garry South argued Brown may have a tough time convincing Democrats to keep backing a program that’s costing voters money. “I equate this to Obamacare,” he said. “This is another fairly massive change in government policy to affect a real problem that people are concerned about, but that is going to have some impact on people’s daily lives. And that always has the potential for a revolt taking place.”

Brown has acknowledged cap-and-trade and other climate change efforts can be a tough sell. “This is really a complex set of pressures that are not easy to talk about in a sound bite, a bumper sticker, or a one-liner,” he said in May. “It is something that is yet to fully capture the public imagination,”

But like it or not, politicians live in the world of one-liners and bumper stickers. Hearing voters say, “Your program costs me money” is a powerful motivator for politicians. And Brown may have to spend a lot of political capital keeping jittery Democrats in line, if predictions about the price at the pump come true.