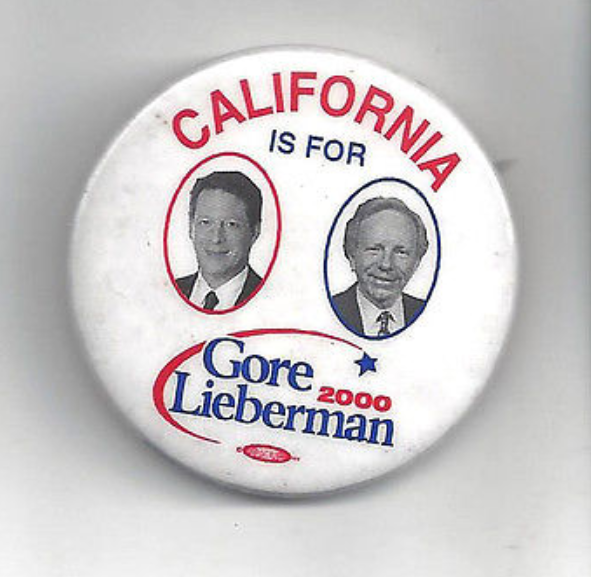 In the 2000 presidential campaign, Vice Pres. Al Gore was challenged for the Democratic nomination by one-time NBA star and former U.S. Sen. Bill Bradley. Since retiring from the Senate after three terms in 1997, Bradley had spent time in residence at Stanford University as he pondered a presidential run, traveling widely throughout California lining up support. Once he took the plunge, his strategy was to outflank Gore on the left on such issues as gun control, universal healthcare and campaign finance reform. Gore had accepted public matching funds in the primary, which limited his campaign to spending only $40 million nationally. Because California is such a big and expensive state, the Gore campaign decided it had to do California on the cheap, with no use of paid media. Gore campaign manager Donna Brazile designated Garry South as chair of the CA Steering Committee for Gore, and South and the small state campaign staff set about designing a primary campaign involving extensive use of surrogates and earned media, including announcing Gov. Gray Davis as California campaign chair, and even enlisting First Lady Sharon Davis to campaign actively for Gore. At the state Democratic Convention in Sacramento in February, South and the Gore operation put on a massive show of force, including a huge reception for delegates honoring Gore hosted by Gov. Davis and featuring The Blues Brothers. The New York Times described it as “a sea of support for Gore.” In the March primary, Gore cleaned Bradley’s clock, winning 80-20% and earning 304 pledged delegates to Bradley’s 63. In November, despite Gore only appearing once in California after the national convention in Los Angeles — on Halloween as a guest on the Jay Leno show — the same surrogate-based strategy, including a fly-around by Pres. Bill Clinton the weekend before the election (done over the objections of the Gore campaign itself, incidentally, but insisted upon by South and Gov. Davis), led to a convincing Gore victory over George W. Bush by 11% and 1.3 million votes, even though Bush had spent more money and time in California than any previous Republican nominee. During the campaign, The New York Times featured a profile of South’s work titled, “A Carville of California Politics Plans to Deliver for Gore.”